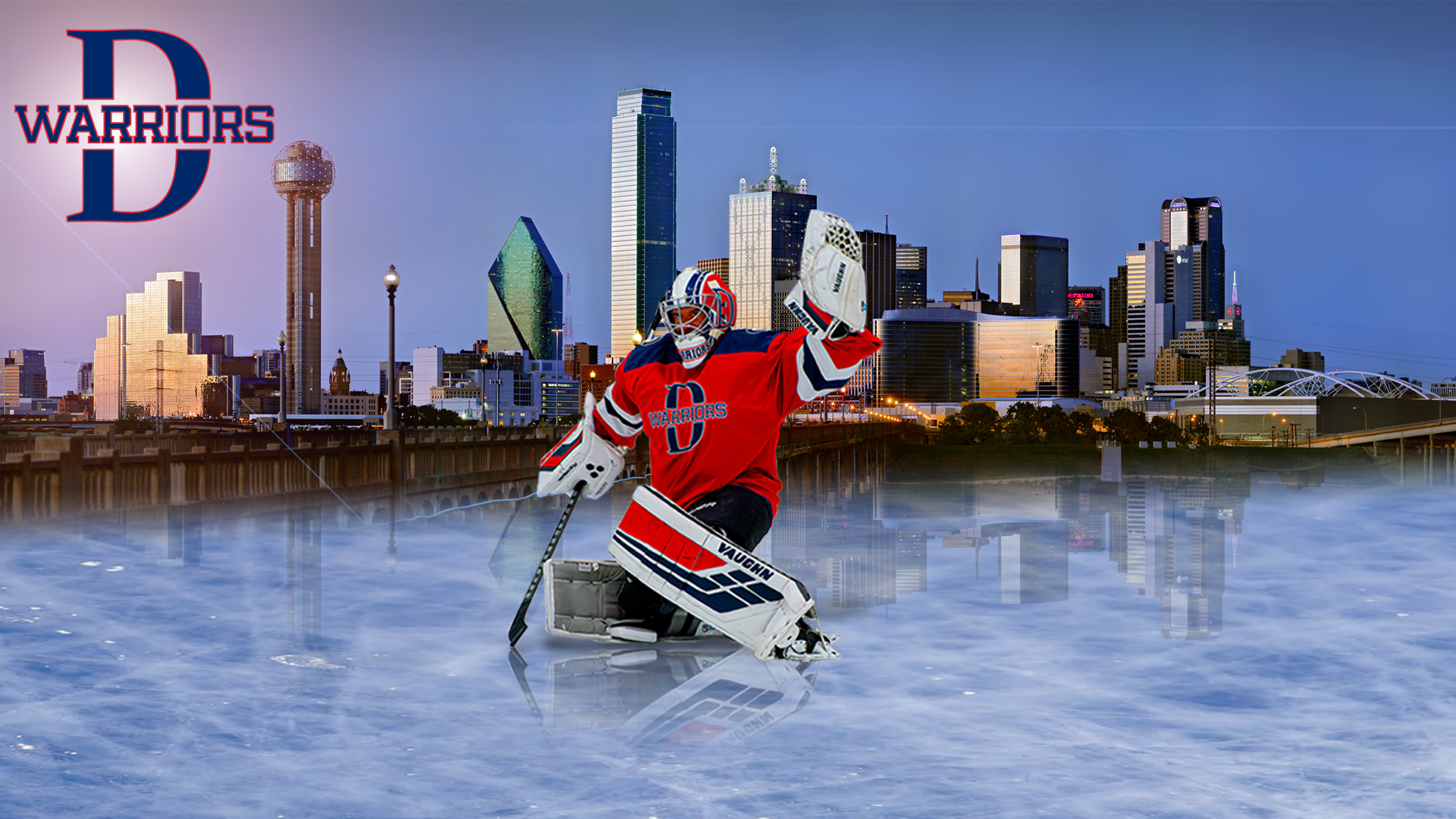 Most of you who play adult hockey in the Dallas / Fort Worth area have probably already met Frank Demma. If you’ve not spoken with him, you’ve probably had some beautiful goals taken away with a flashing glove and a vicious poke check. Even if you don’t play, but have attended a game or two, you might have even HEARD Frank’s booming voice as he defends the net, or discusses strategy on the players bench… That’s the way Frank likes it.

Frank grew up in Minnesota, playing in net from the age of 5, until approximately 10 years before he joined the Army. He is his family’s 3rd generation to serve with his son being the latest to respond to the call.

As a US service member, Frank served 22 years with the US Army, his latest rank a Chief Warrant Officer 5 (CW5), leading special mission units and special operations units in counter-terrorism, counter-espionage and served as the Executive Case Officer with the Army’s premier cyber CI investigative and operation platform.

“Frankly”, there are so many titles and elements of note on CW Demma’s military resume, this author is going to have to cut it short so this doesn’t become The Book Of Frank … And this author now realizes he is now sorry for picking on Frank’s big voice in the opening paragraph!

Around 2012, Demma got some ugly news from his doctors, and he spent months at Walter Reed being treated for cancer. He and his family fought this health challenge until it was pushed into remission, allowing him to continue his Army career, though this would not be the last time his doctors had to have a hard talk about this serious issue over the next few years, and even into his retirement.

“I think the thing that keeps me going the most is my wife and my family. I still have so many things I want to do and accomplish which drives me to continue to fight each and every day to get healthier.”

Frank and his wife, Glenda, made the decision to retire in May of 2021, and Frank started his senior consulting job with a multinational professional services corporation with offices in over 150 countries around the world.

He’s very grateful for a job that allows him to continue to make a difference and help make the world a better place. He is elated to have found the Dallas Warriors organization, and his lady Glenda can often be seen in the stands, taking photos of the games and cheering Frank as he fights his battles on and off the ice.

“… I was thrilled to find an organization like the Dallas Warriors… and now enjoy playing five nights a week on five separate teams. I also try to find some games to sub on for the two off-nights (if my wife will let me)…”

Demma continues to strongly participate in everything the Dallas Warriors organization has to offer, including regularly attending practices and playing in fund raising events and travel tournaments. He very much enjoys the Warrior tournaments and is especially looking forward to upcoming New Jersey and Florida events.

Frank recently invented more free time and has graciously agreed to help lead our organization and is serving on the board of directors. His keen attention to detail, vast experience in communication and logistics will be crucial in helping to lead the Dallas Warriors into the next phase of growth as our Director of Fundraising.

Please help us welcome Frank to the community of veteran hockey players and to the leadership team on the Dallas Warriors!

As a goalie, Joel Brasier takes a lot of pucks to the head, but that’s not the worse that he’s had to overcome.

Joel joined the service in 2001 and did 2 deployments with the 82nd Airborne between 2003 and 2005. After Iraq and Afghanistan, he headed back to Iraq with Ft. Stewart’s 3rd Infantry Division where a suicide vehicle borne IED hit his convoy, leaving him with a serious head injury and ultimately forcing him out of the US Army after 9 years of service.

Now home in Texas, Joel is applying the therapeutic benefits of securing the net to increasing his concentration, attention, balance and hand-eye coordination.

Not being satisfied with some success on the ice, Joel has also tackled extending his education, and is looking to graduate with a Bachelors in Mass Media Journalism, making the Dean’s list in his very first semester.

Joel’s dreams are becoming reality in this “new chapter” he’s started since settling down here stateside, and we with the Dallas Warriors are cheering him all the way!

The 2020 pandemic hit the hockey community hard, and US veterans even harder.

Recreational hockey seasons (called Sessions) in the Dallas/Ft. Worth region were completely frozen with the initial COVID-19 lock-down. The remaining games were later hurriedly scheduled for completion only after area ice rinks began letting players back in. Showers, water dispensers, drinking fountains and social areas had also been closed in some locations, and are still unavailable as of the writing of this article.

“More than half of the veterans surveyed by the Wounded Warrior Project said that their mental health has worsened since the start of the pandemic.”

Teams like the Dallas Warriors, who rely on public and corporate donations to attend regional and national tournaments, were deeply affected by the pandemic as opportunities to partake in national events fell off the calendar. Another thing that fell to the wayside was the corporate funding required to keep the veterans on the ice.

Those veteran groups who are in the habit of training new skaters (such as the Dallas Warriors) sought other options, like bi-weekly coaching for skating fundamentals, team drills and physical fitness. It would not be a stretch to say the veterans who take advantage of these opportunities greatly benefit from the social interaction with their Brothers-and-Sisters of Service.

Once ice rinks reopened, some veteran hockey clubs started, or continued, fielding beer-league teams. Participation in these teams cost the average player several hundred dollars per 12-week session, but gives back in practical way, such as granting game-time to practice the skills they have been fostering.

One team in particular, the Dallas Warriors ‘E’, an entry-level-league team playing out of Farmers Branch, Texas, had two first-time hockey players during their 2020-2021 Winter session. Watching these players grow in confidence and strength has been a real joy for those who give of their time to these vets.

Post-game locker room chatter is filled with statements like “This is the most fun I’ve ever had”, and “OMG, this game is amazing! I’ll never stop playing for as long as I am able.”

Growing the sport of hockey starts locally, and not just with young people. Sharing your enthusiasm and passion for the game is the most effective way to fan the flames of ice hockey amongst your veteran friends.

There are tools available to help you encourage the veterans in your life. Here in North Texas, there is often some form of jumpstart classes, such as the Dallas Stars Adult Rookie program, which is generally available for a free 5-week class to help get new skaters and hockey players started. Loaner equipment is included, and the classes are on Saturdays! https://www.nhl.com/stars/starcenters/adult-rookies…

This type of course isn’t required to SIGN UP to be a Dallas Warrior – If your application is accepted, the Dallas Warriors will assist you with equipment, ice-time, practices and games, so head over to dallaswarriorshockey.com and sign-up today!

While the pandemic can put a halt to businesses and our ability to explore the world around us, it doesn’t end to the need of our veterans to feel a part of a community, and cannot stop those of us who care about our vets from helping to meet that need.

Today we are looking back an entire year before COVID-19 left us wondering when we’d get to play hockey again, to an event which helped to raise awareness for injured and disabled veterans in North Texas, and elsewhere.

The year was 2019, and our own Dallas Warriors member Russ Lusk was invited to the American Airlines Center for a ceremonial puck drop before the Dallas Stars faced off against the New York Rangers.

In addition to this honor, the Warriors were also able to raise money from raffle sales and jersey auctions.

“I have always had a knack for planning events/ parties, so I thought my skills could be best put to use for the Warriors Organization in this role. Since joining the team, I have quickly found a sense of camaraderie and ease fitting in that has helped me personally in numerous ways, so the least I can do is give back to the team by helping it to succeed both on and off the ice.”

Ryan loved it so much, he headed back again in 2009 as a contractor in support of the MRAP – Caiman program for BAE Systems.

Ryan is from a family of warriors: His Grand Father and Father were both retired USAF officers, the former a Major in Radio / TV and Film, and the latter a Lieutenant Colonel and B-52 pilot.

Ryan was accepted into the Warrant Officer program in 2007 but due to a torn ACL, that was put on hold and instead he began his civilian career in 2011.

Ryan has interests in Hockey and Baseball, music (concerts, festivals and collecting vinyl) and a passion for fostering furry friends.

Ryan has gone all-in with the Dallas Warriors, filling board positions in Events and PR, and more recently, picked up the mantle of VP of Operations.

We have all been blessed by Ryan’s inclusion to the Dallas Warriors leadership team, and his contributions always awe us. Welcome Ryan!

As part of the position I am assuming in the office of Webmaster / Social Media coordinator for the Dallas Warriors, I am required to assist in tasks which are comfortable for an introverted techie like myself: Migrating website hosting, DNS and domain management, email server set-up, designing custom graphics and video for our team(s), creating a website, documenting technical debt and a vast amount of information passed on from the last office holder.

There are also some tasks which are decidedly NOT comfortable for a introvert, such as monitoring, creating and engaging in social media posts. Fortunately, we have an amazing team of individuals who have skills and passions that span across the introvert / extrovert spectrum, and they have been great in helping me serve our organization.